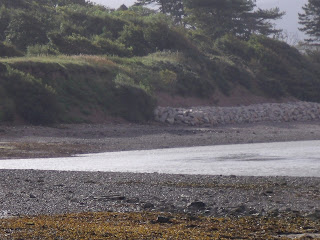 Ravenglass - part of the sea wall
Here we are again, just a brief visit this time. Kurt and Bryan examined the new sea wall in front of the Roman fort – massive boulders set in a deep trench. Let’s hope that it will prevent erosion of the fort for the foreseeable future. 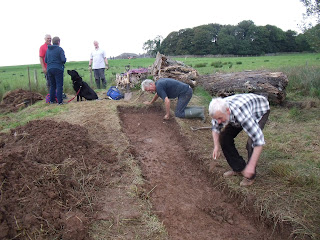 
While Bryan was getting his car fixed in Whitehaven, Kurt assisted the locals (Brian, Leo, Len, Alan and Nick) in recording a small mound near the Decoy Pond. There had been talk of this being an ancient mound, but a recent investigation had been inconclusive. The heavens opened in the afternoon, so we decided to complete the work the following day! 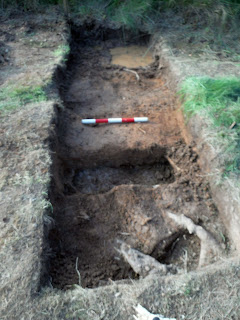 The finished trench
With Bryan back on the case, we made steady work of the small trenches across the mound. This confirmed that the mound was entirely natural. Similar features were observed in the surrounding area, and are probably merely irregularities in the landscape, which formed following the last glaciation some 10,000 years ago. Not the most exciting conclusion, but that’s archaeology!  Sandra arrived by train during the day, and in the evening we had a fine meal in the Ratty Arms with Brian, Patty, Leo and Debbie.

Thursday 15 September
The morning was spent on the Ratty railway, taking in Eskdale Mill at Boot. This impressive working watermill now has a third waterwheel, this time devoted to the production of electricity. Bearing in mind the many powerful streams in the area, it does seem strange that these streams are not utilised for power generation with the aid of some sympathetic engineering. 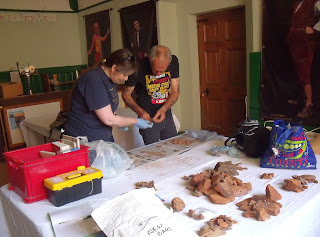 Is it Pot or Not?
In the afternoon, up at Muncaster Castle, Sandra & Bryan sorted the last batch of Roman finds recovered from the beach, probably mostly from the fort. The pottery included Samian ware, the brick and tile included flue tile from a hypocaust, and there was also the greater part of a fine quernstone. This added to the already impressive assemblage of finds that had been recovered from the beach. 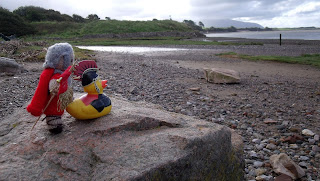 Still on guard at Ravenglass
Back to York, via a snack van at Devil’s Bridge, Kirby Lonsdale!  Thanks to the Ravenglass locals for being so welcoming again. Hopefully we’ll be back soon.
Posted by Sandra at 06:55