The final day on site had fine weather again. Remarkably, almost the entire week on site was dry, so we were lucky.

Test Pit 1 appears to have clipped a clay-line oven or kiln, with ash and charcoal layers suggestive of rakings-ou from the structure.

Test Pit 2 had a thick layer of ash found to over-lie the original Roman ground surface. 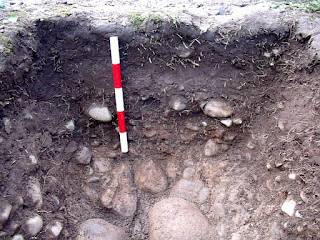 TP5 - road surfaces overlying the base of the road

In Test Pit 5 a third layer of cobbles and pebbles prove to rest on a layer of boulders, apparently the base of a well-built road - presumably the main road north from the fort.  Probing indicated that the road was some 10 metres wide. 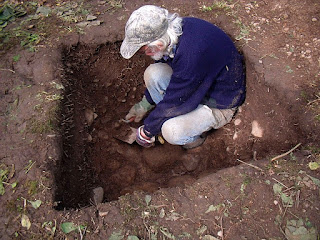 Doug excavating the road base in TP5


In Test Pit 7, a post-hole and small ditch or beam-slot was cut into a layer of burnt clay. 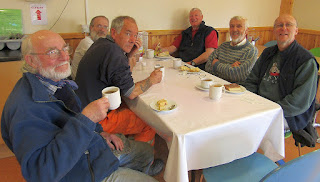 From left to right: Doug, Steve, Bryan, Brian, Len, and Kurt at the Cafe

The trenches were then backfilled after tea and cake at the The Turntable Cafe at the La'al Ratty. 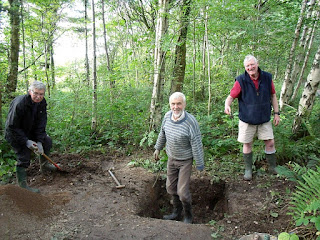 That's the last day of digging news. Watch out for more posts about this season's campaign, including reports about the site finds, the Beach Walking finds, and Kurt's conclusions about the Test Pit excavations!