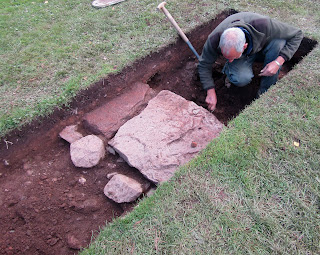 Bryan excavating the rubble layer alongside the culvert in Trench 1
Tuesday
Good progress was made in both trenches. In Trench 1, the culvert was found, complete with large cap stones. To one side, a layer of large stones appeared to fill a large mysterious cut. In Trench 2, a similar layer of stones was found, suggesting that the cut extends into that area and is quite large. So far, the finds suggest that the cut was filled in in the 18th or 19th centuries. Hopefully we will find out tomorrow what this feature is, weather permitting! 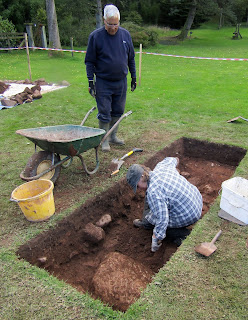 Leo and Rowan in Trench 2, with one of the massive stones in the fill visible in the foreground
Posted by Sandra at 12:56