A very busy day on site! In Trench 1, a cobble surface was revealed, cut by garden features of probable Victorian date. Sherds of medieval pottery suggest this surface could be associated with the 14th century castle. Perhaps archaeological deposits have survived close to the castle, safe from garden landscaping. 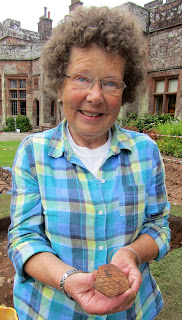 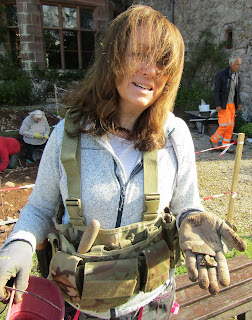 In Trench 2, it is increasingly clear that the old trench has been relocated and traces of the hearth are visible, but what is it? At Trench 2, it was planned to extend the trench in order to understand the oven better. However, this proved impossible due to the dense vegetation, so it was decided to open up an adjacent trench (Trench 3). This immediately produced a large whetstone.

Jane with the large whetstone